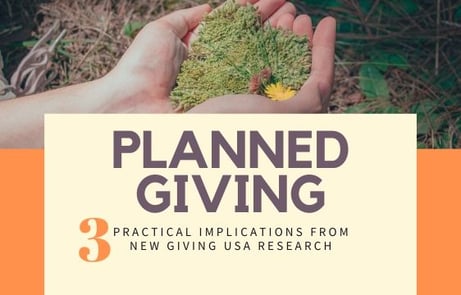 1. Motivation to make a planned gift. What motivates a donor to support an organization through a planned gift? According to this study, the planned giving donors placed far greater emphasis on the mission of the organization (78.8%) and its impact on the world (75.5%) as the primary motivating factors in the decision to establish a planned gift. Conversely, motivations such as tax reduction (10.3%) and estate/financial planning issues (8.9%) were reported as motivations far less frequently by the donors.

Implication for your planned giving marketing: While it is certainly important to share information about specific planning opportunities, it would be unwise to exclude your organization’s mission and impact from your planned giving marketing. For the vast majority of planned giving donors, gift vehicles provide a way to give, not a reason to give. Solicitation discussions should approach donors holistically, focusing on how they can make their best gift to support your mission, looking at annual gift, planned gift, major gift, and even blended gift options. Download our e-book for more information and advice on “Integrating Planned Giving into Major and Annual Gift Programs.”

2. Loyal annual giving, engaged volunteerism. Donors most often reported that their largest planned gifts were designated for organizations they have been supporting for years. More than 55% of respondents indicated that their first gift to the organization had been at least 20 years prior to their most recent gift. Donors also indicated that “firsthand knowledge of the organization (as staff or volunteer)” was a significant factor in their decision to make their largest planned gift commitment.

Implication for your planned giving outreach: Many organizations focus first on real (or perceived) indicators of wealth. Planned giving then becomes a fallback second option that follows conversations about a major outright gift. Do not forget about your most loyal, repetitive annual giving donors as well as your closest volunteers. They typically know your work and your impact better than anyone else and they have already demonstrated that they care deeply. Your best prospects are both donors and volunteers. JGA recognized the importance of pinpointing prospects with both capacity and inclination to give when developing Acuity®, it’s a new, innovative screening tool that combines wealth screening with engagement data. This tool makes it easier to focus your cultivation efforts on your most passionate donors.