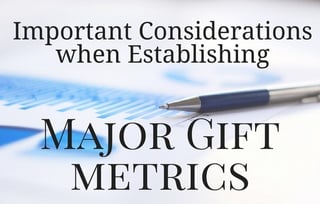 The art of fundraising focuses on fostering support for your mission by developing relationships with donors and aligning their philanthropic goals with organizational needs. Yet, in philanthropy it is important that we focus on both the art and science of fundraising by tracking the metrics behind those relationships.

Here are a few things to consider as you explore incorporating metrics into your major gift program.

Determine the purpose of your metrics

First things first.  Do you intend to set minimum standards for major gift officers below which they will be considered to have failed?  Or, do you intend to use the metrics as a way to set a higher bar that helps to identify the top performers?  In other words, are these metrics meant to be a carrot or a stick?  Although I would typically recommend an environment based on positive reinforcement, there are some organizations that might benefit from setting a clear standard of minimum performance. What is most important is that everyone understands this context in advance and that the metrics are designed to fit their stated purpose.

Several years ago, I participated in a survey of frontline fundraisers who worked at a few dozen large colleges and universities.  At the conclusion of the study, the results were shared with those of us who participated.  Each college or university had a slightly different target for substantive contact/personal visit metrics.  Yet, according to the survey results, each university had zero frontline fundraisers who actually met the stated standard.  Is it possible that all of the fundraisers at all of these universities were failures?  I don’t think so.  My personal observation is that there was a disconnect between the perception of fundraising activities by senior leaders/board members of these institutions and the realities of the work. The goals were more likely to have been set in the context of the former rather than the latter.  Would we permit campaign goals to be determined this way?  Hopefully not!  Make sure your metrics are reasonable and strategic, not “impressive.”

One size does not fit all

Determining appropriate goals for a major gift officer must be calibrated to the specific work of that officer.  Is the fundraiser a new hire who is to build a new portfolio of relationships for the organization?  Has the officer inherited an existing portfolio of well-cultivated relationships?  Or, has the MGO been with the organization for several years and already developed a number of strong relationships?  Is the fundraiser a Director of Development with program and/or staff management responsibilities or is she focusing entirely on major gift donor and prospect relationships?

Setting the exact same metrics for each major gift officer is rarely appropriate.  For an officer who will build a new portfolio, place greater emphasis in the first year on the goal for personal visits and minimize (or eliminate) the goals for proposals and dollars raised.  In that officer’s second and third years with an established portfolio of relationships, then it is more appropriate to incorporate goals related to proposals and dollars.

Some organizations, particularly those with larger teams of frontline fundraisers, manage these differences by using an adjustable scorecard.  For example, each officer has a goal of “scoring” 50 points in the fiscal year but the mixture of points earned for different tasks is weighted differently depending on context.

Metrics do not equal management

Metrics can and should be a useful tool for managing and evaluating a major gift program.  However, having metrics in place should be a beginning and not an end.  As the term “metrics” has become increasingly common  in the nonprofit sector over the past decade, its usage has in some cases become a synonym for “management”.  It isn’t.  Those who are supervising major gift officers often also have their own portfolios of major gift relationships to manage.  Perhaps they achieved the management position specifically because they have been successful fundraisers and have little management experience.  For some it may be difficult to resist the temptation to remain externally focused and they therefore rely on the metrics to take care of everything else.

To maximize the performance of the team and each individual, it is crucial to maintain regular communication about each fundraiser’s portfolio, specific prospect situations/challenges, and progress toward annual goals. Metrics should not be subjected to an annual check-up like a wellness exam, they need to be frequently revisited and reviewed.

If metrics aren’t set correctly, there can be unintended consequences. For instance, as the fiscal year draws to a close, it is possible that a major gift officer who has had a successful year and has already met his or her goals might perceive an incentive to defer certain donor conversations to enhance performance in the next fiscal year.

Having goals and a culture of accountability should not mean that an organization has abandoned donor-centered fundraising that is based on relationship-building activities.  An organization should not want its major gift officers to feel an incentive to “shotgun” proposals at prospects when it is too early and also should not want to encourage delay.  The only way to ensure there is no misunderstanding on these points is to have frequent and honest communication between officer and supervisor about the officer’s pipeline and top prospects.  An officer should feel comfortable raising this issue and the organization should be flexible enough with the metrics to allow a gift to occur naturally. In this example, if it is happening near the end of a fiscal year, perhaps allow it to be measured in the following year.  If this happens with regularity rather than as an exception, then the goal may be set a little too low.  Either way, communication is the key.

If you’d like to learn more about establishing major gift metrics and explore best practices, I encourage you to watch a recording of our recent webinar for an in-depth discussion on the subject.

And, here are some additional resources on major gifts you may find useful: