Major gift donors are crucial for the ongoing sustainability of your nonprofit’s mission. In fact, high net worth donors often provide as much as 94% of the funds for nonprofit campaign initiatives. So, it is important that we understand their giving patterns, preferences, and motivations. 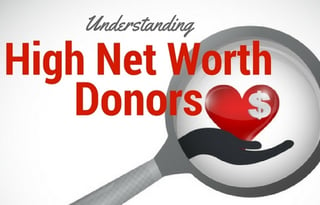 The 2016 U.S. Trust® Study of High Net Worth Philanthropy released this week is the sixth edition of the biennial study, researched by the Indiana University Lilly Family School of Philanthropy and provides nonprofits with valuable insights on this important donor demographic. The report surveyed 1,435 U.S. households with a net worth of $1 million or more (excluding the value of their primary home) and/or an annual household income of $200,000 or more.

I have an upcoming webinar planned on December 7th with Una Osili, Director of Research at the Indiana University Lilly Family School of Philanthropy, and Claire Costello, Managing Director of the Philanthropic Solutions Group at U.S. Trust, to review the findings in depth and discuss how nonprofits can use this data to structure your major gift fundraising program. Please register now to join us!

In the meantime, here are 10 of the key findings from the report: