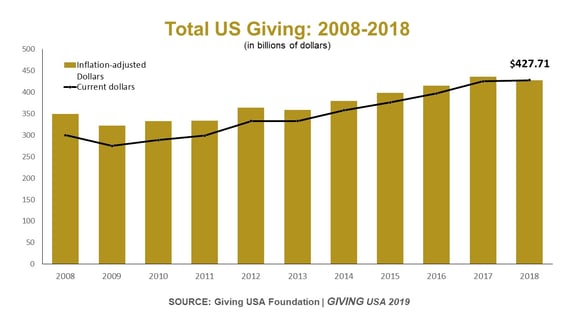 “After reaching record-breaking levels of giving in 2017, American individuals and organizations continued their generous support of charitable institutions in 2018,” said Rick Dunham, chair of Giving USA Foundation. “However, the environment for giving in 2018 was far more complex than most years, with shifts in tax policy and the volatility of the stock market. This is particularly true for the wide range of households that comprise individual giving and provide over two-thirds of all giving.”

There were mixed results in terms of both the sources of giving and the recipients of that giving. Giving by foundations and corporations increased, while giving by bequests remained largely stagnant and giving by individuals decreased slightly. This is the first time since 1954 that the amount given by individuals constitutes less than 70 percent of overall giving. Still, giving by high net worth individuals makes up the lion’s share of all giving and it’s important that nonprofits prioritize their time and resources accordingly.

Of the nine charitable recipient subsectors, two – International Affairs and Environment & Animals – saw growth in giving as compared to 2017, three  – Arts, Culture & Humanities, Health, and Human Services – had giving numbers relatively consistent with last year, and four  – Foundations, Public-Society Benefit, Religion, and Education –  saw declines in 2018. It is notable, however, that even the subsectors that declined in 2018 had positive two-year growth. For instance, while giving to Foundations technically declined in 2018, it followed anomalously high giving levels for that subsector in 2017. Indeed, even when adjusted for inflation, the amount given to Foundations in 2018 is more than eight percent larger than any other years besides 2017. Likewise, giving to education declined by 1.3% in 2018 (3.7% when adjusted for inflation). However, giving to education experienced strong growth in 2017. In general, it is not unusual for strong growth in giving one year to be followed by a slower giving the next, especially when adjusted for inflation.

Giving to religion decreased by 1.5% in 2018 (3.9% when adjusted for inflation). This decline follows seven years of slow or stagnant growth in that subsector. Giving to religion is comprised largely of giving by individuals. Patrick M. Rooney, Ph.D., executive associate dean for academic programs at the Lilly Family School of Philanthropy, explained, that the decline in giving to religion “follows trends in individual giving, but the decline is likely aided by a number of other factors, such as the growing number of Americans who are not affiliated with any religious group.”

Dr. Una Osili, Professor of Economics and Philanthropic Studies and Director of Research at the Lilly Family School of Philanthropy, surmised that the growth in the International Affairs subsector can be partially attributed to relatively few disasters domestically, in comparison to 2017, which was plagued by a number of domestic natural disasters. Increased attention to the droughts in sub-saharan Africa and the refugee crisis in Syria may have also boosted giving in this subsector.

“Despite declines in 2018, many subsectors experienced their second-best year for giving ever, when adjusting for inflation,” said Laura MacDonald, vice-chair of Giving USA Foundation. “We know that there are organizations in each of these subsectors that found success in 2018, as well as organizations that faced challenges. The chapters of the report offer greater context for understanding how some groups are continuing to raise charitable dollars even when some donors are facing new giving conditions. Now, as always, it is vital for organizations to understand the forces impacting their foundation, corporate, and individual donors.”

The complexity in giving mirrors the complex economic and policy environments of 2018. Some economic indicators likely boosted giving, including increases in disposable personal income of 5.0 percent and gross domestic product of 5.2 percent over 2017. However, stock market volatility at the end of 2018 may have tempered those giving decisions.

The Tax Cuts and Jobs Act also went into effect in 2018 further complicating the read of these results. The new law significantly increased the standard deduction meaning that many fewer individuals will choose to itemize their deductions, i.e. gain any tax benefit as a result of their charitable contributions. This reduces the incentive to give but it is still unclear the extent to which it has or will have a negative impact on charitable giving. Because this is the first year that the law has been in place, many individuals may not have realized this incentive to give had been removed until they filed their taxes in 2019, meaning that this year may be more revealing in terms of the implications of the law. Even further complicating the outlook, the new tax law increases the maximum charitable deduction to 60 percent of adjusted gross income. This expands the incentive to give for some high net worth individuals and may mitigate some of the negative impacts of the law on charitable giving.

What do these results mean for future nonprofit fundraising? Another year of strong economic growth continues to result in high levels of charitable giving. However, Americans’ choices when it comes to giving are sensitive to changes in policy and market volatility, especially when it occurs at the end of the year when many Americans make the bulk of their giving decisions. How sensitive is a question that cannot be answered fully yet, based only upon this year’s estimates of charitable giving.

The message for all of us that work with nonprofits is to discuss with donors how the complicated and uncertain policy climate affects them individually. We must also embrace new financial tools to manage and recruit volunteers, to communicate with organization boards, and to prepare for various contingencies. Finally, we must be adaptive to the changing landscape of philanthropy as the Baby Boomer generation prepares to retire, GenXers continue to gain wealth,  and Millennials begin to move into their higher earning years.

We encourage you to download a free copy of the Giving USA 2019 infographic or order your full copy of the report at givingusa.org.