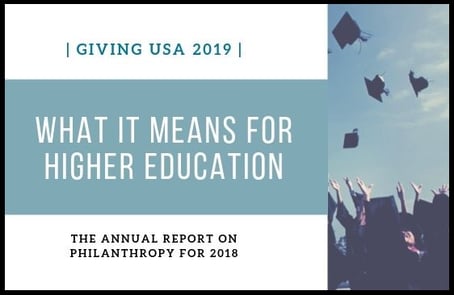 Online giving represents a small (5.4 percent of total fundraising) but growing (1.1 percent over 2017) source of donations for higher education organizations, according to the Blackbaud Institute’s Charitable Giving Report: How Fundraising Performed in 2018.

Giving USA also reports that large donations—often received in response to campaigns—are becoming more common and a central focus for higher education. The Blackbaud Institute‘s donorCentrics Annual Report on Higher Education Alumni Giving found that while more money is being raised, it is coming from fewer donors. These gifts are enabling institutions to address challenges and even alter the way institutions are run. Indeed, Giving USA reports that several colleges avoided closure altogether as a result of philanthropic support and others have been able to decrease or eliminate tuition payments by students due to major gifts.

It is notable that certain provisions of the Tax Cuts and Jobs Act may have affected giving to higher education in 2018 and continue to do so in the future. The new tax law, implemented in 2018, enacted a 1.4 percent tax on the net investment income of private colleges and universities with more than 500 enrolled students and assets valued at over $500,000 per student. Giving USA notes, however, that only a small number of schools are affected by this provision.

Source: Giving USA 2019: The Annual Report on Philanthropy for the Year 2018, published by Giving USA Foundation, a public service initiative of The Giving Institute, researched and written by the Indiana University Lilly Family School of Philanthropy.