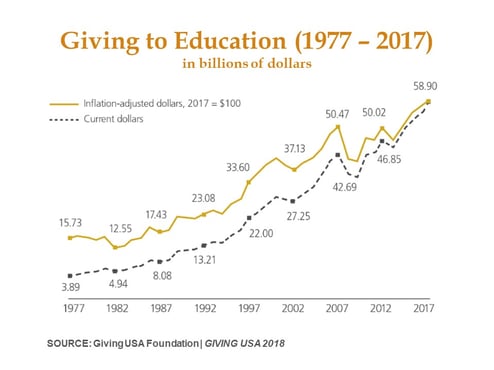 According to the VSE study, alumni giving accounted for 26.1 percent of total giving to higher education institutions in 2017, a slightly larger proportion than the previous year. However, this decline comes on the heels of extraordinary growth in individual giving in 2015 (10.2 percent from alumni and 23.1 percent from non-alumni).

High-net-worth donors continue to give priority to giving to education. The Chronicle of Philanthropy reports that its Philanthropy 50—America’s 50 wealthiest donors—supported colleges and universities to the tune of $1.8 billion in 2017, second only to foundations at $9.1 billion.

Suggested steps for maximizing fundraising for colleges and universities within this context include:

Source: Giving USA 2018: The Annual Report on Philanthropy for the Year 2017, published by Giving USA Foundation, a public service initiative of The Giving Institute, researched and written by the Indiana University Lilly Family School of Philanthropy.