We've had a couple of weeks now to absorb the data on 2016 charitable giving provided by the release of the Giving USA 2017 report.  Now, we'd like to share a look at the implications of the data for those fundraisers involved in higher education advancement. 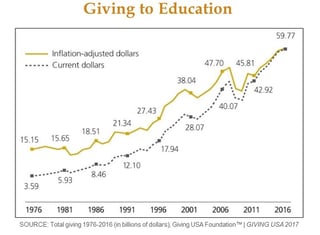 To recap, according to Giving USA 2017: The Annual Report on Philanthropy for the Year 2016, total charitable giving in the United States grew by 2.7 percent to $390.05 billion in 2016. This marks the highest total amount given in the 40 years Giving USA has tracked this data, both in current dollars and when adjusted for inflation.

After weathering the recession’s effects on the economy and philanthropy, data shows the past seven years as recovering steadily, though not without some turbulence. The same can be said of 2016, with good overall growth despite the uncertainty of a presidential election year. Giving to every category of recipient organizations increased when measured in current dollars, and all but three exceeded their previous high marks. Four different subsectors (health; arts, culture and humanities; environment/animals; and international affairs) saw growth of 5.7 percent or more during the previous year. Giving by the primary sources of philanthropic dollars – foundations, corporations, individuals, and charitable bequests – increased by 3.5 percent or more, except for bequests, which saw a decline of 9 percent.

This overall growth continues a positive seven-year trend, but growth in 2016 is considered moderate overall. It is encouraging that giving continues to increase in the face of an evolving national economic and political climate. Specific sectors have reacted significantly to the uncertain times, such as international affairs and environment/animals, which saw significant growth in giving of 5.8 and 7.2 percent, respectively. Health (5.7 percent) and the arts, culture, and humanities (6.4 percent) subsectors also saw strong growth in 2016. Research suggests that growth in certain sectors may have resulted from “rage donations,” defined as donations motivated by a frustrated reaction of some donors in response to post-election policy changes.

Giving USA estimates that giving to education organizations (of which giving to higher education accounts for 70 percent of the total) increased 3.6 percent in 2016 to $59.77 billion. The Council for Aid to Education’s Voluntary Support of Education (VSE) survey shows that individual giving (alumni and non-alumni) to education declined by 7.4 percent, while contributions from corporations and foundations grew by 14.8 percent and 7.3 percent, respectively. That said, giving from individuals still comprises the largest source of funds given.

Over the past two years, Giving USA estimates that giving to education grew 12.5 percent, which was surpassed only by the growth in giving to international affairs (20.7 percent) and environment/ animals (13.5 percent).

According to the VSE study, alumni giving accounted for 24.2 percent of total giving to higher education institutions in 2016, a smaller proportion than the previous year. However, this decline comes on the heels of extraordinary growth in individual giving in 2015 (10.2 percent from alumni and 23.1 percent for non-alumni).

Giving to education continues to be the most popular philanthropic cause for high net worth donors, according to the Wealth-X and Arton 2016 report, Changing Philanthropy: Trend Shifts in Ultra Wealthy Giving. This report notes that 47 percent of donations from high net worth individuals reportedly went to education, with 22 percent supporting higher education specifically. These results continue to bode well for higher education institutions.

Source: Giving USA 2017: The Annual Report on Philanthropy for the Year 2016, published by Giving USA Foundation, a public service initiative of The Giving Institute, researched and written by the Indiana University Lilly Family School of Philanthropy.