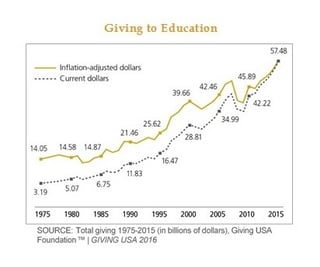 To recap, according to Giving USA 2016, total charitable giving in the United States grew by 4.1 percent to $373.25 billion in 2015. This marks the highest total amount given in the 40 years Giving USA has tracked this data, both in current dollars and when adjusted for inflation.

The past decade has been a tumultuous one for both the economy and philanthropy. This data suggests that the years of crisis and ensuing period of recovery have now been replaced by a period of stable growth. For the past six years, total giving to charitable causes in America has steadily increased. Giving by all the primary sources of philanthropic dollars – foundations, corporations, individuals, and charitable bequests – have reached new heights when measured in current dollars. When we look at recipient organizations, all but one subsector (giving to foundations) experienced positive growth from 2014 to 2015, and five different subsectors (education, public society benefit, international affairs, the arts and the environment/animals) saw growth of 5 percent or more during that time period.

Giving USA estimates that giving to education organizations (of which giving to higher education accounts for 70 percent of the dollars) increased 8.9 percent in 2015 to $57.8 billion. This tracks closely with similar results from the Council for Aid to Education’s Voluntary Support of Education (VSE) survey, which found a record 7.6 percent increase in contributions to higher education organizations during the same time period.

Over the past two years, Giving USA estimates that giving to education grew 16.4 percent, which outpaced growth in all but one other subsector (giving to the arts). Perhaps more impressive, giving to education experienced the largest absolute growth of any subsector in 2015, increasing $4.7 billion dollars.

This tremendous growth has been driven largely by the generosity of individual donors, who provided 46.8 percent of all contributions to higher education in 2015 according to the VSE. A slight majority of these individual gifts (57 percent) came from alumni.  Giving from alumni grew at an impressive rate of 10 percent in 2015, but that increase was dwarfed by the dramatic 23 percent increase in giving from non-alumni individuals.

Giving by high net worth donors has likely fueled this rapid growth.  Several studies have found that giving by wealthy individuals increased more quickly following the recession than giving by low and middle income households. High net worth households felt the benefits of the economic recovery more quickly than those at the lower end of the economic scale, which has allowed them to give more, and studies have consistently found that education organizations are the most likely recipients of gifts from high net worth households. The end result has been, and will likely continue to be, tremendous opportunity for higher education institutions.