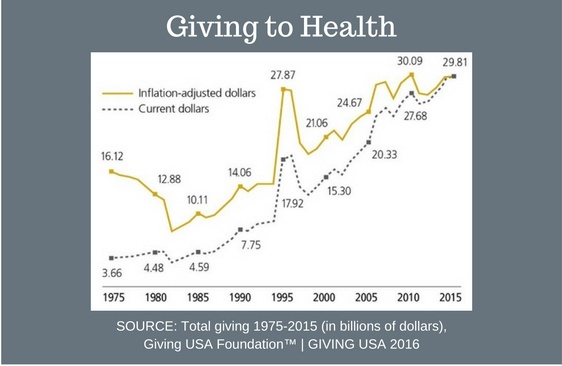 The good news for health organizations is that the $29.81 billion dollars given to such causes in 2015 is the highest total that subsector has ever received in current dollars – slightly surpassing the previous high water mark from 2014 of $29.43 billion. In comparison to other subsectors of recipient organizations, however, health organizations are struggling to capitalize on the recovering economy and expanded charitable giving.

Since 2010, giving to health has grown 7.7 percent in current dollars, which pales in comparison to the 29.5 percent growth in total giving during the same period. Not surprisingly, giving to health ranked last in terms of growth out of the nine subsectors in that five-year span.

This slow rate of change is due in large part to a steep 6.6 percent decline in giving to health in 2011 and modest recovery in the years since. Some, if not most, of this decline came as a result of donor uncertainty created by the passage, implementation, and legal challenges to the Affordable Care Act (ACA), which was approved in 2010 and will continue to be rolled out through 2022.

The ACA has prompted reorganization of health funding models and healthcare delivery models across the country, and continued legal challenges and political promises to repeal and replace the law have left many in the field, as well as donors, uncertain of where the best opportunities for long term impact exist. At the same time, health research organizations have struggled with stagnant government funding from the National Institutes of Health (NIH) and other medical research related governmental funding streams. This has put pressure on philanthropic dollars to fund future innovation.

Here are some suggested steps to improve healthcare fundraising results for health organizations: