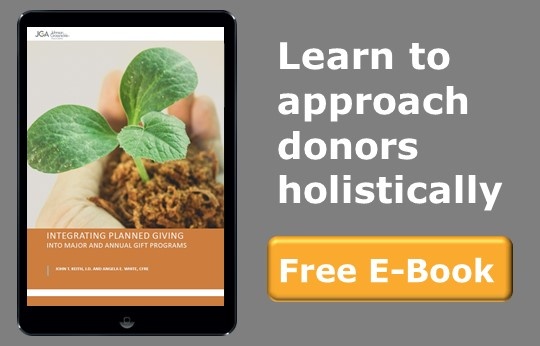 Several generational, demographic, and financial trends demonstrate the interest and capacity among donors to make planned gifts. One of the best ways to ensure your organization is positioned to benefit, is to integrate planned giving into your major and annual gift programs.

As Paul Schervish, a groundbreaking researcher into wealth transfer, has for many years advised, it is important to talk to donors about all of their assets, not only their cash assets.

Schervish stresses that with only 5% of the wealth in the country held in cash, fundraisers are leaving significant assets on the table if they are not exploring non-cash assets.

Many charities don’t feel comfortable having conversations with donors about transferring or donating non-cash assets. But, we need to recognize that donors are more likely to pass on a non-cash asset at death, than they are during their lifetime, making these assets a perfect planned giving opportunity.

Organizations also need to recognize that as they are cultivating their prospects and having conversations with them about potential gifts the conversation needs to be holistic – integrating annual gifts, major gifts, and planned gifts into the discussions. Gift officers should be trained to have those conversations.

Planned giving should also be fully integrated into your communication and marketing plans. Because planned giving is not just an avenue for major gift prospects, communicate and educate all of your constituents about planned gift opportunities with your organization.

Whether you have a seasoned planned giving program or are just beginning, now is a great time to make sure you are integrating planned gifts into your development program.