Capital campaigns are an important tool in raising funds for nonprofits. In fact, 20% of higher education institutions reported that being in a fundraising campaign helped them raise between 176% - 200% more funds. It’s no wonder then that in the first half of 2015 approximately 46% of nonprofits were in a campaign, up from 11% in 2011. 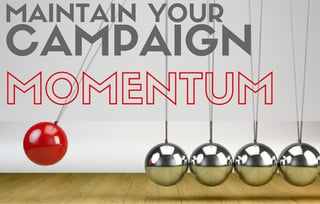 While a campaign can be a crucial initiative for moving an organization forward, the reality is that the vast majority of campaigns experience a period – or sometimes multiple periods – of time when they seem to lose steam.  After all, campaigns are a multi-year initiative, so it’s not surprising that there will be ebbs and flows in momentum. While a few bumps and lulls are to be expected, here are some ways you can ensure that the overall trajectory of your campaign remains positive.

Remember there is a lot to love about campaigns. They can be a fun and exciting time for an organization, its volunteers, and donors.  They provide an opportunity to outline an organization’s vision for moving forward and allow donors to engage in new ways. Campaigns can also provide a platform for organizations to introduce themselves to a new audience and ideally broaden their donor base.

Hopefully you can use these ideas to keep the momentum going and drive your campaign to a successful conclusion.

Other resources to help with your capital campaign planning: