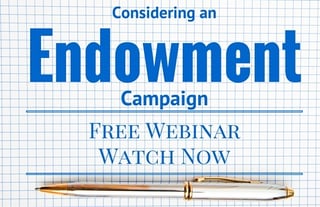 tutions. While each of them have many specific and unique characteristics, it is also true that we observe and help them grapple with some of the same broad issues. One trend we have been seeing more frequently lately,  as referenced in a recent Chronicle of Philanthropy article, is the increasing interest in raising endowment support, leading many more institutions to consider an endowment fundraising campaign.

In the 1980s and 1990s, a few clients made serious efforts to substantially grow their endowments. And some were successful but many more of them were interested primarily in funding current needs such as programs, scholarships, and facilities. As one example, back then it was the rare client who raised funds for ongoing maintenance while also raising funds to build the facility.

But things have changed.

There are likely several reasons for this. Since the 2008 financial crisis, many more donors ask questions about long term sustainability of their institutions. Endowed funds seem to generate more interest among many of them as a way to sustain the mission.

For other donors, they wish to be generous and want to make a major or even a lead gift. But they also wish to help their children or grandchildren (often with educational costs) and they are concerned about having enough money for themselves. This makes many more donors increasingly interested in planned gifts as a possible means to help them achieve their goals.

And in our experience planned gifts often “serve as the royal road” to gifts of endowment. With more planned gifting (and the estimated $63 Trillion intergenerational wealth transfer underway), it is a good bet that there will be more inclination to at least consider endowment.

I co-presented a webinar on the topic of endowment with our friends at Oxford Financial Group and you can view/listen to it online here. It goes into this issue with a bit more depth than I can do in this blog, but I'd like to share with you my list of 5 key implications to bear in mind when/if you are considering an endowment fundraising campaign:

I’d be interested in hearing if you are also seeing a stronger interest in endowment on the part of your donors and institutions.