Giving to Religion - A Leader in  Charitable Giving

Giving to Religion - A Leader in  Charitable Giving

Giving USA has published the longest-running, most comprehensive analysis of charitable contributions since 1957—and religion continually tops the list over the other nonprofit subsectors by a wide margin. The Giving USA:Special Report on Giving to Religion (Fall 2017) sheds new light on giving to this important sector, including the unique challenge of calculating these estimates and how the evolving religious landscape is changing charitable giving in America overall. 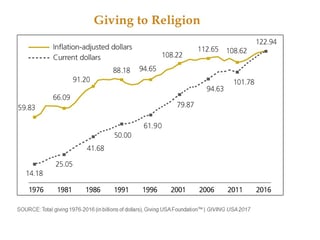 At an estimated $122.94 billion given in 2016, religion cornered the market at 32% of total giving, which is more than twice the next closest contender, education. But a closer look at the data behind this sector reveals some relevant facts that can inform giving more broadly across all sectors. Generally, religious donors give at higher rates to other subsectors than their non-religious peers, according to Connected to Give: Faith Communities.

It is important to note that the nature of religious giving makes it more difficult than other sectors to quantify, because religious institutions do not file Form 990s and congregational giving is the only sector in which fundraising is typically not handled by professional fundraisers. An additional challenge is that about 25% of churches are no longer affiliated with a particular denomination and new congregations are forming on a regular basis. Giving USA is the only annual report on giving to religion across all faith traditions in the U.S.

The following key findings are based primarily on the Indiana University Lilly Family School of Philanthropy Philanthropic Panel Study (PPS), part of the Panel Study of Income Dynamics (PSID) by the University of Michigan, cited in the Special Report.

2  Religious affiliation impacts religious giving. In general, 62 percent of religiously affiliated households give to charity, whereas just 46 percent of those with no religious affiliation do so. Protestants give more to religion than other denominations, but Jewish households appear to be more generous overall than their counterparts, giving more to charitable organizations overall.

4  The number of donors giving within generational cohorts (Millennial, Gen X, Baby Boomer, and Pre-Boomer/Silent) has declined, but giving is steady among those who give. The average annual charitable contribution has gone down from generation to generation when examining all households, with Millennials donating the least.

5  Religious giving increases with income and wealth. Both the number of donors increases as well as the amount given, as income rises for religious donors.

6  Religious giving increases with educational attainment. This finding can be attributed, at least partly, to the link between education and income.

8  Single women are more likely to give to religion than single men. The same is true of overall giving, but the difference between giving amounts is much smaller.

Religious organizations can benefit from learning more about their donors and taking some cues from other charitable organizations in key fundraising practices. Congregations are increasingly forming a group to oversee fundraising efforts and cultivating major gift donors is becoming more common. Younger donors should not be forgotten—and they may want to be engaged in volunteer roles as well. Investing in software to track contributions can be helpful internally, but also to demonstrate the impact of giving in the work of the church or organization.

The religious sector is changing, and that evolution will continue to affect charitable giving—not just within giving to religion, but giving overall. Religious donors give substantially more than others to nonprofits across all subsectors—an important factor to keep in mind for all charitable organizations.