Engage and Celebrate Generosity on #GivingTuesday

Engage and Celebrate Generosity on #GivingTuesday

The rapid changes in our world create challenges and opportunities that are exciting, yet can be difficult to wrap our arms around as citizens, leaders, philanthropists, and fundraising professionals. A poignant example of rapid change in the field of philanthropy is the advent of #GivingTuesday over the past few years. 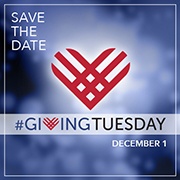 The Lake Institute on Faith and Giving at the Lilly Family School of Philanthropy hosted the founder of #GivingTuesday and Executive Director of the 92nd Street Y, Henry Timms, in Indianapolis in mid-October. Timms shared his wisdom, his inspiration, and perspective on the changing marketplace with members and guests of the Indiana Chapter of Association of Fundraising Professionals (AFP) during his visit.

Launched in 2012, #GivingTuesday can be a great way for organizations to raise awareness and reach current and prospective donors. #GivingTuesday is a designated day—the Tuesday following Thanksgiving in the United States—centered on bringing charities, families, businesses, community centers, and students around the world together for one common purpose: to celebrate generosity and to give.

In his conversation with AFP, Timms shared about the transition in all facets of society between “old power” and “new power.” Old power, he explained, is held by few and is leader-driven—a more closed system. It is a long-term structure, focused on affiliation, loyalty, and institutionalism.

One model is not better than the other—in fact, a hybrid approach to these systems can achieve the best results. Yet, as younger generations age, he suggested that the new power model will become more standard, as people will feel they have a right to participate and engage. This continual shift will ultimately move individuals from being donors to owners—and will require organizations to adapt.

#GivingTuesday is a consumer-focused model which is self-directed and inspired. Within three years of its launch, in 2014, it engaged donors from at least 68 countries, more than 27,000 charities, and created 15.4 billion impressions. From 2013 to 2014, there was a 40% growth in overall participation, a 63% growth in online giving, and a 101% growth in mobile giving. #GivingTuesday is clearly meeting a demand—one that incorporates new power strategies.

What can we learn from the growth of #GivingTuesday? How might professional fundraisers and nonprofit organizations utilize this well? Following are a few of my takeaways:

What would you add to this list? If your organization has participated in #GivingTuesday or another day of giving, or plans to do so for the first time, I encourage you to share your ideas, tips, and successes in the comments section of this post.

Other resources on engaging donors in new ways: